Google has made inroads into the smart home market with all kinds of products. Their Nest Labs division is the main route they have taken to implement these changes. As a result, many of their products have been rebranded or upgraded to include the Nest name. One example of this is in its innovative and market-leading mesh WiFi product. This article will compare the newer Google Nest WiFi vs Google WiFi and explain the upgrades that came about in the rebranding of this product. 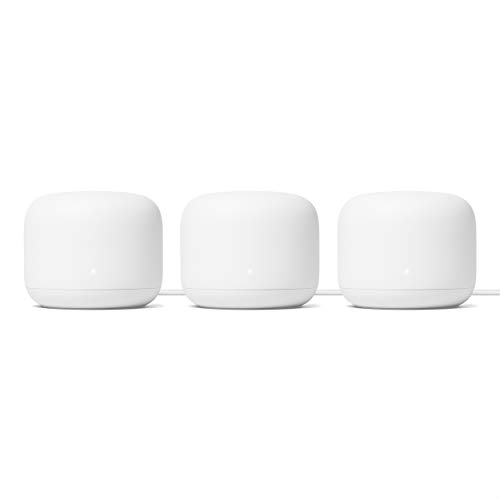 Also read: Google WiFi vs Orbi vs Eero vs Velop

The Google Nest WiFi was released in late 2019 with a range of impressive specs and features that make it one of the leading products in the market. Available in packs of one, two or three units, the coverage of this system can reach up to 6600 square feet. This flexibility of options makes it scalable and allows users to start with less to see if it is enough for the size of their home. One of the routers will plug into your service providers modem then the others work by extending the signal. The specs of this mesh WiFi are very solid, most notably its speed as it is an AC2200 router with 4 x 4 antennas. In a 2.4GHz frequency, its maximum is 400Mbps and 1,733Mps on 5 GHz. This is powered by a 1.4GHz quad-core processor and 1GB Ram making it able to handle up to 200 devices, as claimed by Google. Multiple 4K videos can be streamed at one time with these speeds. What is special about the Google Nest WiFi is that it is a smart speaker as well as a router. Each unit has a 360-degree speaker and all the functions you could expect with a Google Home Mini.

The original Google WiFi was a leading router in the market for quite a few years although the upgraded Nest WiFi was suitably timed. This mesh wifi system is highly simple yet effective at delivering signals across the home. Selling points of the original Google WiFi are also attributable to the newer Nest WiFi as it is just an upgraded version. Included is the companion Google WiFi app that provides an extra layer of control and monitoring. Such features included prioritizing devices speed, pausing kids’ devices and live bandwidth. However, as we will explain later, the Nest WiFi works with the Google Home app, not Google WiFi. Google WiFi is certainly less powerful and speedy than Nest WiFi. As An AC1200 router, it doesn’t match the speeds of the Nest WiFis AC2200.

In this section, we will look more deeply into the upgrades and differences between Google WiFi and Nest WiFi. The main areas of comparison and differences are the design, speed, coverage, app and smart speaker function.

Each of these models follows the clean white look intended by Google. The Nest WiFi has a slightly different design which is a little bit cleaner and more aesthetic than Google WiFi. The original Google WiFi is a cylinder and sharper-edged router, whilst the Nest WiFi is a smoother and dome-shaped router. The newer version is also slightly larger and heavier. This Nest WiFi design is more similar to the Google Home Mini. Perhaps this is a brand-wide style they want to adopt on all of their products. The branded G of Google on the router is also more subtle on the Nest WiFi as it is indented rather than printed on. Underneath they both still have 2 ethernet ports alongside the power socket.

Perhaps the most crucial difference between these two products is the speed. When comparing routers it is the performance between each router that stands out. As we already covered with the products overviews above, the Nest WiFi is quite a bit speedier than the Google WiFi. The Google Nest WiFi has a 1.4 GHz processor and 1GB of Ram, whilst the original version has 710MHz with 512MB of Ram. Here are summarized speeds:

The original Google WiFi system uses the Google WiFi app that brings additional control and monitoring. With it you can do many functions such as prioritize bandwidth to certain devices, view live bandwidth usage and create a separate network for guests. Google Nest WiFi has its features on the Google Home app, a move that was directed by Google’s desire to bring together its smart home system into one place. On the Home app you can do everything you can on the Google WiFi app, except changing some more advanced options. When you select those in the Home app you will be redirected to the Google WiFi app. Included control options that can only be done there are DNS, WAN,LAN settings as well as a few others. The Nest WiFi has a few extra features on the Home app which are for optimizing for Google Stadia (a cloud gaming platform).

A major difference is that Google Nest WiFI supports Google Assistant and has a 360-degree speaker on it. In reality, it is much more than just a mesh wifi router, it is an access point to all the features you can get from a basic Google Home speaker. This is useful for streaming audio, making calls, asking Google questions and turning your smart lights on.

The Google Nest WiFi is considerably more advanced than the original Google WiFi. This is down to two main factors; the speed increase and the smart speaker aspect. If you are looking to get a smart speaker, especially Google Home, and a mesh WiFi at the same time, then this product is a bit of a no brainer. The coverage is also quite a bit more solid than the Google WiFi, with a wider range and better performances at those ranges.

Google WiFi vs Nest vs Orbi vs Eero vs Velop

Back to top button
Close
Close
We use cookies to ensure that we give you the best experience on our website. If you continue to use this site we will assume that you are happy with it.Ok