At the lower end of the most iconic cordless stick vacuum series, you have the Dyson V7 and V8. Released first in 2016, the Dyson V8 was a leading product in the market. It did leave a hole between itself and the V6 in terms of price and features. Accordingly, the V7 was released in 2017 to fill this space and create a slightly more affordable yet very similar vacuum that was on a par with the V8. This article will compare Dyson V7 vs V8 provide an explanation of the key differences and similarities in order to help you decide whether the extra price of the V8 is worth it.

The Dyson V7 actually came out after the V8 with the intention of offering many similarities at a more affordable price. Overall, the Dyson V7 is a robust choice that provides high-performance results. Designed for both hard floors and carpets, the Dyson V7 has a digital motor that spins up to 110,000 a minute. There are two powers modes that uses can select from for their cleaning; Max mode for the highest suction and Powerful mode for longer cleaning times. When used most sparingly, the Dyson V7 can last for up to 30 minutes in a single clean.

A great thing about the Dyson V7, as with all cordless stick vacuums, is their versatility in cleaning that it can achieve. There are many different included tools that can help the vacuum clean small confined spaces, both in low positions and elevated positions. For example, the Crevice too can help the V7 get deep into corners. Additionally, the lightweight nature of the V7 can also help you get into ceiling corners too.

The Dyson V7 comes available as four different versions which are the Absolute, Animal, Motorhead and HEPA. The variance between these different versions is down to providing different cleaning heads, accessories, and filters for finer particles. Everything else is exactly the same, such as the design, motor and battery life. Here is what is unique or different about each version, in addition to the main accessories (listed later on) that come with each model:

The animal model was created for homes with pets so that maybe something worth considering if you had any furry friends.

Despite having a higher name in the series, the Dyson V8 was actually created before the V7. It is a well equipped cordless stick vacuum that at one time would have topped the series and been a leading product in the market. First off, the Dyson V8 has a more powerful digital motor of 115 Airwatts compared to the V6 which has 100 Airwatts. The motor itself also spins up to 110,000 times a minute. Another advantage of the Dyson V8 over the V7 is the battery life that can last up 40 minutes on one charge when used conservatively, an extra 10 minutes.

Beyond these few features, the two cordless stick vacuums are actually very similar, especially in regards to shared accessories and one-click bin emptying. Ergonomically there are also on the same level, which is crucial for cleaning harder to reach spots. There is also the same option of clean modes, Max and Powerful, which can be alternated for harder to clean spots and battery conservation.

One difference between these two models is that the Dyson V8 only comes available in the Absolute, Animal, Animal+, and Motorhead versions. However, it should be noted that the V8 does have a HEPA filter already. We explore these differences more in another article. 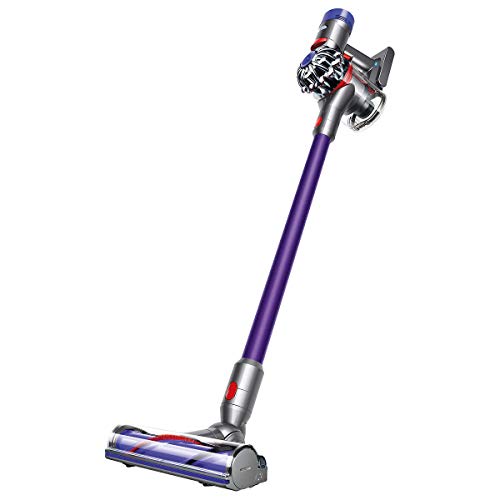 In this section, we will cover the main similarities of the Dyson V7 and V8:

The Dyson V7 was purposefully released to offer a slightly cheaper alternative to the V8, designed to be of very similar quality. Overall, the Dyson V8 is definitely a better model due to the extra cleaning power, a larger dustbin, battery life and every model having a HEPA filter. If you can afford the extra few bucks then the Dyson V8 is definitely worth it, especially if you have more carpets.

Dyson V7 Absolute vs Animal vs Motorhead vs HEPA