Dyson’s pioneering cordless technology has profoundly changed the home vacuum market. These upright, light and cordless vacuum cleaners are compact by nature and perfect for accessing the hard to clean places. With such a cordless vacuum, your not restricted to the floors. This article will compare the Dyson V6 vs V7, explaining the key features yet subtle nuances between the similarly named upright vacuum cleaners. Both these Dyson models are top sellers and for a good reason too. Cheap, effective and compact are the three characteristics that stick out with the Dyson V6 and Dyson V7. By the end of this article, you will have an idea of which one is best suited for you.

The Dyson V6 series is considered their breakthrough in manufacturing cordless vacuum cleaners. When this version was released in the market, it was the most powerful cordless vacuum cleaner and is still one of the best there is out there. The V6 has six different models which are essentially stick vacuums that can be converted into handheld cleaners. There are many subtle differences between them which can be a little confusing.

At the top of the range is the V6 Absolute, the most expensive of the V6 models since it consists of all the accessories that has for its vacuum cleaners. The V6 Fluffy is a soft roller cleaner and is the perfect fit for hard floor surfaces. Next, the V6 Animal is similar to the V6 Absolute but does not include the soft fluffy roller in the box. The V6 Motorhead is being considered as the budget vacuum cleaner since it is cheaper than the rest and comes with fewer accessories. The V6 HEPA is similar to the V6 Motorhead but comes with the HEPA filter. Lastly, the V6 cord-free is the lowest version in the V6 series and has no HEPA filters. 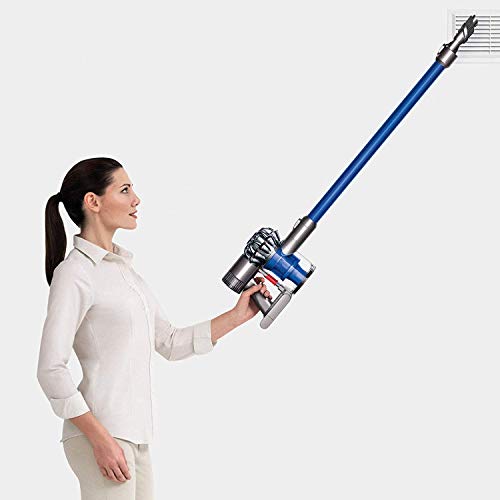 The Dyson V7 vacuum cleaner came out after they launched their premium V8 vacuum cleaner. The V7 has many similarities to the V8 but is sold at a more affordable price. The V7 is available in  4 models; the V7 Absolute, V7 Animal, V7 Motorhead and 7 HEPA. These models are similar to the V6 models with the only difference being the advancements made in the V7 series cleaning technologies, making the device closer to V8 performance.

Similarities of Dyson V6 vs V7

Differences of Dyson V6 vs V7

Which cordless vacuum should you buy?

If you’re planning to buy either of the two, there are a few things to keep in mind while making your purchase. Here is how you can choose between the Dyson V6 vs V7:

As this Dyson V6 vs Dyson V7 comparison, both the series have a set of models that sell, such as the Animal or Motorhead. You can check out the features of each model and make your choice depending on which Dyson cordless vacuum cleaner fits your needs perfectly. Both the Dyson V6 and Dyson V7 are extremely powerful cordless vacuum cleaners with features unique to each series. We also recommend reading our Dyson V7 vs V8 article if you want to look at a slightly higher level comparison.

In this section, we will answer the most commonly asked questions about the Dyson V6, V7 and how the two compare against each other.

The Dyson V7 is a newer and more advanced cordless stick vacuum cleaner than the V6 with higher performance and better features. With a cleaning motor that is 75% stronger than the Dyson V6, the V7 is a much more capable and thorough device. It also has an extra 10 minutes of battery life of 30 minutes total compared to the Dyson V6. The higher the V-number, the better the cordless vacuum cleaner.

What is the difference between the Dyson V6 and V7 Absolute and Animal model?

The Dyson V6 and V7 Absolute models come with a soft cleaner tool that improves hard floor cleaning, whilst the Animal doesn’t. If you clean mostly hard floors you may want to invest in the Absolute to get better cleaning performance.

What is the battery life fo the Dyson V6 and V7?

The Dyson V6 and V7 have quite short battery lives, which are 20 minutes and 30 minutes respectively. This is a short time considering they take on average 3.5 hours to fully charge. That said, you can use each one plugged in for an indefinite amount of time.

Dyson V7 vs V8: What are the differences?

Dyson V8 Absolute vs Animal: What is the difference?